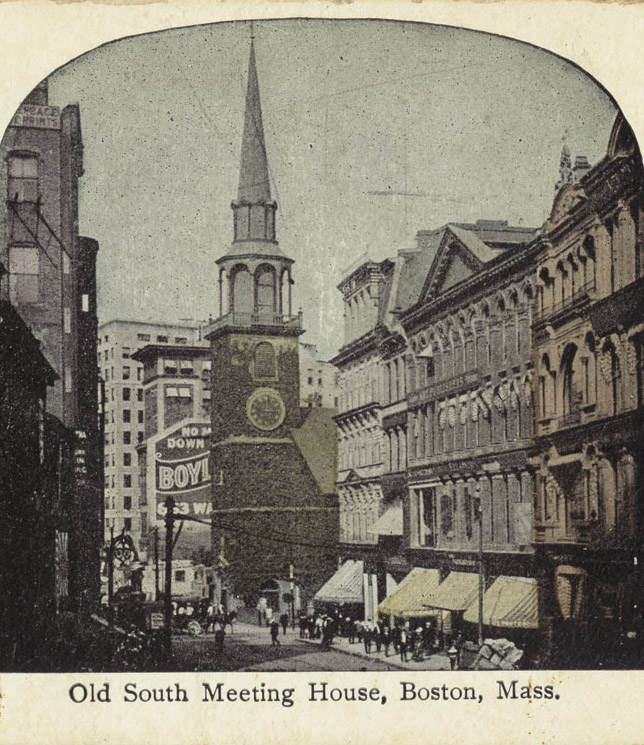 For Phillis Wheatley, the deliverance to the United States was a fortunate event since it led her to the Christian God. When she first arrived to Boston, she was sick and weak. Unable to attend the Wheatley family’s church, she chose to attend services at the Old South Meeting House, located on the corner of present-day Washington Street. The Old South Meeting House was built in 1729 to house a congregation of believers who had split from the First Church of Boston. These founders believed in the halfway covenant, which dictated that the children, and later slaves, of church members could be “half-way” church members until their religious experience helped them become full members.

Despite the split, the church members remained wedded to a Puritan belief system. Puritans concerned themselves with every aspect of colonial life, including the American slave system, slave baptism, and the slave owners’ treatment of the slaves. Thus, Puritan clergy took the lead in Christianizing slaves because it was their religious duty to do so and the crown urged royal governors to obtain laws to restrain masters from inhuman treatment of slaves. This granted African slaves rights based on the Mosaic Laws of bondage, “this regarded slaves as a mark of personal misfortunate and not as evidence of inherent inferiority.” For Phillis Wheatley, this rule meant that she had the right to practice Christianity.

In addition to its proximity to the Wheatley family home, the Old South offered Phillis Wheatley exposure to new forms of Christian teachings. The Great Awakening spread in Britain and across the American colonies, though historians note that many colonial families within Boston remained resolute to Puritan teachings. Nevertheless the Old South congregation still allowed for these new progressive ministers to preach in their meetinghouse including George Whitefield. In his sermons, Whitefield preached against the ill treatment of African slaves and noted that they could be saved if converted. Whitefield’s sermons were in line with the Old South’s halfway covenant, giving African slaves like Phillis Wheatley hope that freedom in religious expression could lead to freedom from chattel bondage.

Even though Phillis Wheatley believed in the Christian teachings, she still had to abide by the cultural views of the Old South. The Puritan church did not allow slaves to sit in the main pews. Phillis was forced to sit in the balcony if seats were available, and if not—she had to stand outside and listened through the windows. Her belief, however, remained unwavering and when George Whitefield died, she wrote him an elegy that turned her into a celebrity. Her celebrity and religious devotion finally allowed her to gain baptism in August 1771. Nevertheless, when Phillis Wheatley attempted to publish her poems, a group of elite, white men had to cross-examine her to prove that she had the ability to read the Bible and write in eloquent prose.

Much of Wheatley’s success stems from the sermons taught at the Old South Meeting House—where she was not cast away because of race—but was welcomed to convert and begin the journey of self-actualization and duty given by the Providence. Wheatley used her pen and paper as the pulpit to evangelize the gospel in its truest form.

‘T WAS mercy brought me from my pagan land,
Taught me benighted soul to understand
That there’s a God – that there’s a Saviour too;
Once I redemption neither sought nor knew.
Some view our sable race with scornful eye –
“Their color is a diabolic dye.’
Remember, Christians, Negros black as Cain
May be refined, and join the angelic train.
(On Being Brought from Africa to America)

The Poems of Phillis Wheatley with Letters and a Biographical Note (Mineola, NY: Dover Publications, 2010.), 3-4.

Zilversmit, Arthur. The First Emancipation the Abolition of Slavery in the North (Chicago, IL: University of Chicago Press, 1967.), 34.